PHARMACOLOGICAL ACTION:
Both components of tablets have their own action site in the malarial parasite. The presence of the endoperioxide bridge in Artemether (generating singlet oxygen and free radicals: those are very cytotoxic to the plasmodia) appears to be essential for antimalarial activity. Morphological changes of the parasitic membranes induced by Artemether have been described, being the result of free-radical action.

Other in vitro tests suggest that both cause a marked diminution of nucleic acid synthesis. Inhibition of protein synthesis as the basic mechanism of action is suggested in studies which showed morphological changes in ribosomes as well as in the endoplasmic reticulum. Although Artemether acts essentially as a blood schizonticide, tablets did clear gametocytes in comparative clinical trials.

Tablet is indicated for the treatment of malaria in children, caused by all forms of Plasmodium including severe malaria caused by multiple drug resistant strains of P. Falciparum.

Sensitivity to cimetidine or related agents.
Should not be administered to pregnant or lactating patients.

Shake the bottle to loosen powder inside. Add water to the mark point and shake well. Adjust the volume up to the mark if necessary. The suspension must be used within one week after preparation. Shake well before use. 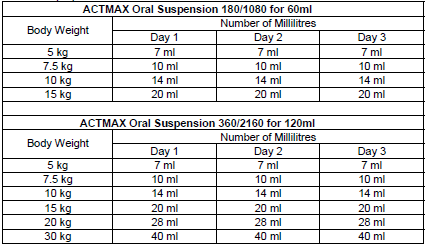 SIDE EFFECTS AND SPECIAL PRECAUTIONS:
With Artemether virtually no side effects have been seen. Laboratory abnormalities such as a slight rise in transaminases and a decrease in reticulocyte count are rare and transient. A lowering of sinus frequency without causing ECG changes has been noticed. At high doses transient abdominal pain, tinnitus and diarrhea have been described but a causal relationship is unclear.
Some antimalarials as halofantrine and quinine can influence the ECG pattern. Attention should be made to patients previously treated with those antimalarials. A reasonable period should be taken in account before to start a. treatment with lumefantrine combinations. For those patients physicians will be prescribed Artemismin derivatives in mono therapy in cause of severe paludism. Sometimes it could be possible that the following common side effect occur; rash, check this with you doctor. Other common side effects may occur as trouble of sleeping, nausea, vomiting, diarrhea, coughing. They need medical attention when persisting.

Store below 25°C in a closed bottle. Once the suspension has been made up, it is stable for a minimum of one week. Longer conservation is not recommended. Protect from light.